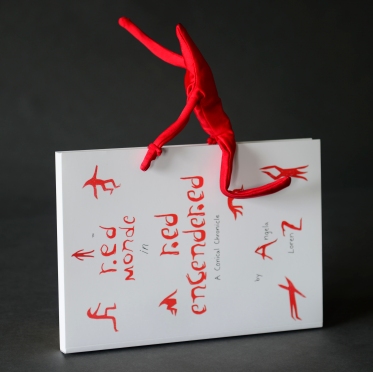 r.ed monde is an amorphous humanoid with a pointy head according to the U.S. Patent and Trademark Office, born in watercolor in 1985 in Bologna, Italy. The graphic novel, r.ed engender.ed – A Conical Chronicle, was published in 2016 in a limited edition of 300 copies with a signed and numbered r.ed monde sculpture attached to the cover.

Here are the films linked by QR codes in the graphic novel, plus the full series of yoga poses as a single video (the last one on this page).